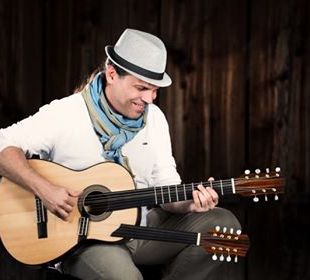 There is so much to listen to in an Attila Vural song. Rhythmic patterns, baselines, melody, tempo changes - each playing brings another surprise if you put everything aside and really listen. "Another Strumming in the Blue" is packed with examples of this. Starting with "Painting a Reverie" which, although short and solo, sounds like a trio of percussion, bass, and jazz guitar.

If you've never seen Attila Vural perform, you've got to check him out. The Swiss guitarist is a dazzling musician. His dexterity and speed, his incorporation of percussive rhythms and his original music are extraordinary. His instruments are unique works of art, in particular, his dobromandola, a hybrid designed by Vural, with two necks jutting out from the body in a vee. Watching him move up, down and around the instrument is a mesmerizing experience.

Moonbeams Rise as Quavers - Attila Vural Beautiful? No. His music has never been beautiful in the strict sense, however, it is well received by his world-wide audience. An evening with Attila Vural, exciting and indescribably touching, leaves the listener spoiled with a rough taste of the real world. Even though his new opus was recorded in Woodstock where endless wide woods and lush green mountains make the real world seems fresh and wonderful, this non-conformist Swiss does not let himself suddenly convert to odes of a heavenly, pure melodious sound. On a number of somewhat unusual (string) instruments, Vural plays his powerful, frizzy, unpredictable and willful music while creating sounds with nearly every imaginable resource (on this record also with E-Bow) including strings and guitar bodies which taste mostly earthy at first, but then often turn into a heavenly finish. In contrast to mainstream music which appears digitally smoothed, VuralÕs approach is more authentic and pleasant with the constant element of restlessness and angularity in an acoustic mix of delta blues, folk, grunge and classical modern age. His latest work, 'Moonbeams Rise As Quavers', is his most accessible and mature so far: despite all severity and occasional dissonance, it contains beautiful, relaxed melodies or percussively-spiced fingerpicking-grooves of miraculously-spun eccentricity ('Squirrel Meeting'). The final track played as an instrumental, 'Harvest Moon', is a delightful homage to Neil Young. It brings to the point what the Swiss is capable of: With him one still feels the grit under their feet while indulging in the moonlight. Both are needed to bring the real magic together. - Michael Lohr / German Acoustic Guitar Magazine 2/2016

To extend the limits of an instrument such as a guitar would seem to be hardly possible, which makes what Swiss acoustic guitarist Attila Vural has accomplished on his newest album "Some Place of Sounding" even more impressive. He mainly plays an 8 string guitar and a two-neck model with 14 strings. Virtuoso, he plays all his instrumental compositions (with the exception of one track with vocals) and manages to merge typical fingerstyle guitar with folk, jazz and blues music. It`s remarkable which sounds he produces with his hands only: overtone cascades, individual flat or sharp notes intoned, polyphonic and flat chords - with alternating fast virtuoso excursions guaranteed. Also noticeable is his percussive playing, in which he includes his guitar in its entirety by drumming on top and sides of his instrument. All this often sounds like two instruments, but Vural stressed in the booklet: "This is a live recording with no overdubs, no loops or edits." Exceptional!