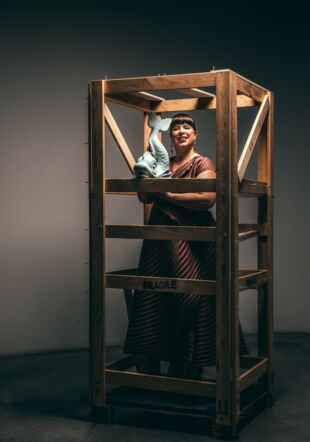 The exhibition presents a selection of works by Joana Vasconcelos including ceramic and textile pieces from her acclaimed Bordalos and Boxes series, alongside two ceramic works by Ai Weiwei.

The exhibition presents a selection of works by Joana Vasconcelos including ceramic and textile pieces from her acclaimed Bordalos and Boxes series, alongside two ceramic works by Ai Weiwei. By revisiting the readymade and the parameters of New Realism and Pop Art, both artists ironically question contemporary society, its socio-cultural norms and collective identities. Their nonconformist visual language, often referring to the history of art and playing with the codes of luxury and design, or with the potential of elements drawn from the domestic universe, allows artisanship and industry, tradition and modernity, popular culture and erudition to coexist. In the English lexicon, the expression Melting Pot is defined as a space within which “elements of very varied origin mix, where different ideas meet.” For this reason, the phrase is often used to describe diverse, multicultural societies.

The present exhibition is part of the International Academy of Ceramics (IAC) 2022 Congress. Marking the organisation’s 70th anniversary as well as its 50th congress jubilee, this year’s event takes Melting Pot as its theme. Hosted by swissceramics, the Geneva-based Swiss association of professional ceramists, the congress runs from the 12th to 16th September 2022. An exceptional 5-day program will include academic conferences, debates and visits to national and international exhibitions. More than 25 exhibitions based on the theme are organised in public and private museums, art galleries and historical or contemporary institutions in the city as well as other locations in the French-speaking part of Switzerland. A UNESCO partnership evening is also planned to bring to a close the week’s activities.

The IAC was founded in 1952, immediately after the 2nd World War, with the aim of building bridges between people and cultures through the art of ceramics. It held its first General Assembly in 1954 at the Ariana Museum in Geneva, its birthplace and headquarters. That year, 14 participants from 14 countries were present. The IAC currently boasts 1010 members, representing 77 countries from all continents. Since 1958, the organisation has been affiliated to UNESCO and makes numerous contributions to its various mandates in the fields of science, education and culture. Henry Reynaud, founder of the IAC, pursued his original ambition to make Geneva the international capital of past and contemporary ceramics. From its outset, Reynaud imagined the Academy as a multicultural domain, nurturing intellectual and artistic exchanges at the highest level. He advocated reconciliation and friendship between people and played a decisive role in obtaining the status of official NGO partner of UNESCO.

In 2005, Joana Vasconcelos began to create sculptures from a limited set of faience pieces designed by Rafael Bordalo Pinheiro (1846-1905), considered to be one of the most renowned Portuguese artists of the 19th century. The appropriation carried out by Vasconcelos, within the scope of Bordalo Pinheiro’s vast production in ceramics, only includes the naturalist representation of specific animals. Some of these animals are rendered oversize and their proximity to the viewer might generate surreal perceptions. Creatures with whom man generally has a controversial relationship, such as wasps, lizards and snakes, crabs and lobsters, frogs, or bull, donkey and horse-heads, wolves or cats are ambiguously veiled by a second skin in crochet, thus introducing unexpected flows of meaning in the dialogue between popular and erudite culture. The use of crochet as a paradoxical protection of the animals, as well as the direct reference to the domestic context, opens up a vast and rich field of interpretation enhanced by the beauty and strangeness generated as a result of the gesture. The name of each piece is inspired by personalities from history or society etc., often in relation to the country or location where the work is exhibited for the first time.

In 2006, the artist Ai Weiwei stayed in Jingdezhen, the center of Chinese ceramic production and studied with local craftsmen who were proficient in the medium. Crafting an ordinary watermelon in porcelain, China’s highest and most highly-respected art form, challenges the reverence for the medium. The perfectly realistic object also interrogates the issue of product authenticity in China.