Conférence: Geology of the Andes North-west argentina and chile 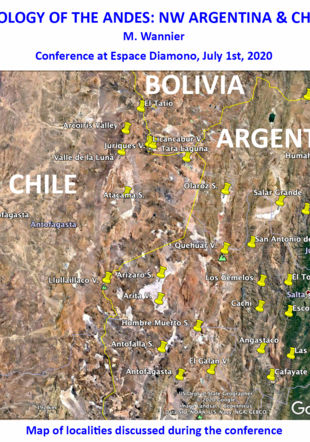 La présentation sera donnée en anglais The Andes mountain chain was formed during the last 60 million years through the eastward subduction of the Nazca oceanic plate in the Pacific Ocean underneath the South American continental plate.

Geology of the Andes

The Andes mountain chain was formed during the last 60 million years through the eastward subduction of the Nazca oceanic plate in the Pacific Ocean underneath the South American continental plate.

The main phases of uplift occurred during the last 15 million years, raising cordilleras and a high plateau, the Altiplano or Puna.

Following the Tropic of Capricorn, a 750 km long, West to East section from offshore north Chile to North-West Argentina shows the main plate tectonic and structural elements of the Andean mountain belt:

1. The eastward plunging Nazca plate forms a 7km deep marine trench some 100 km off the coast of Chile, as it plunges under the continental crust of South America.

2. The coastal area consists of low relief mountains separating flat basins. It is an extremely arid zone, where the Atacama Desert, the driest place on Earth, stretches for ~150 km from the coast to the foot of the high-altitude volcanic belt.

3. The Western Cordillera is a volcanic chain including the 6.7km high Llullaillaco, the highest volcano on Earth. This cordillera marks the eastern boundary of the Puna, a 3.2-4.8 km high, arid plateau where large salt flats (Salares) have formed.

4. An Eastern Cordillera, up to 6.3km in height, separates the Puna from a series of elongated valleys (such as the Quebrada de Humahuaca) separated by ridges created by deep basement thrusts.

5. To the east, the Subandean Zone consists of a series of shallow thrust anticlines, progressively decreasing in height towards the youngest deformation front in the Chaco Salteño.

This entire area is of great natural beauty and includes national parks and a UNESCO World Heritage Site. Various travel logs will be followed through, one leading to the Caldera del Galan: this is one of the largest volcanic calderas on Earth, the site of massive volcanic explosions during the last 8 million years, with the largest one 2.2 Ma ago impacting the climate worldwide.

This presentation is meant for a general public and is picture-based; geological information is balanced with travel logs, illustrated with photographies by the author.

Places are limited, prior inscription and registration are necessary