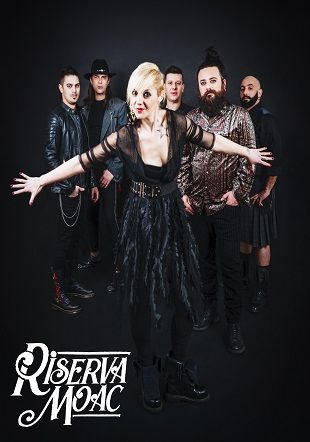 If you blend rock with world music, etno instruments with global beat, electro with accordion… you would find yourself into the “glocal” mood of the Riserva Moac.

If you blend rock with world music, etno instruments with global beat, electro with accordion… you would find yourself into the “glocal” mood of the Riserva Moac. A village in which meeting, mixing and exchanging ideas is the norm; where true wealth is Humanity. In 15 years of “experience”, Riserva Moac totalized a great number of concerts in Italy and Europe, an impressive amount of achievements as well as its constant presence in a variety of Italian and foreign compilations.

Baptised as a band at Arezzo Wave 2003, in 2005 their first official Cd Bienvenido (Upr-Edel) was released. The positive engine of the reviews let the band play at the 2006 Primo Maggio concert, in a very crowded piazza San Giovanni in Rome. Amongst the most important festivals in which the band has taken part are the Festival Interceltique de Lorient (FR), the FIMU in Belfort (FR), BJCEM, not to mention an important tour in the USA.

Anticipated by the single Il Riservista and by new European experiences such as the famous TFF 2008 in Rudolstadt (DE), in June 2009 their second album La Musica dei Popoli was released. Their sound was by then compact and grand; the fusion of styles, instruments and languages was deep, giving life to a “glocal” sound, with Balkan and rock influences. Every year the band performs in frequent shows in Germany and France.

In summer 2014 they released Jackpot, a new irrepressible single featuring Erriquez, frontman of Bandabardò. Jackpot was placed on heavy rotation on a number of national radio stations, holding first place for 16 weeks on the Indie Music Like chart. Always in 2014 the Riserva Moac won the HitMusicAwards, thanks to which Jackpot and MayDay MiDai were published on Hit Mania 2014, a famous compilation selling over 30,000 copies.

In 2015, the 3rd album: Babilonia (released by the German label Galileo-MC). All this with original musical arrangements reviewed thanks to a frenetic brass session with the Bukurosh Balkan Orkestra. A choral album, in which numerous featuring artists contribute to creating that Festa Social Global Underground which is the message of the Riserva Moac.

In 2016, the band is engaged in an intensive live activity, performing in some of the historical clubs and cities of Italian musical scene. New energy also thanks to the concerts in European festivals: Sommerfestival der Kulturen in Stuttgart, Kramenbruckerfest in Erfurt, Stadtfest in Jena. 2016 is also the year for a Riserva Moac tour in Italian theatres. Babilonia’s songs become the live soundtrack in Shakespeare’s King Lear, directed by S. Sabelli.

Since 2017, thanks to the joined work with Make A Dream, Riserva Moac is on the road again with tireless activity.

On 2018, December 18th, new single and videoclip Tintilia Gran Riserva are released as preview of the new album that will be released on February 2019 and new European tour from March.

On 13th May 2019 the new album “Tintilia Gran Riserva” released: 10 tracks with another videoclip, “Beltane”.